HALDIMAND—Hundreds of Haldimand students walked out of class on Thursday, April 4, 2019 to protest changes to the education system, including expanding high school class sizes. Two days later, thousands of educators, including some local-area high school teachers, converged at Queen’s Park on April 6 to protest the expected reduction in teaching jobs from these changes.

The Province previously announced it would increase high school class sizes on average from 22 to 28 students, along with slightly increasing Grade 4-8 classes by one student. Grand Erie District School Board (GEDSB) estimated that the high school changes would result in the potential loss of 94 teaching positions and eight additional positions that focus on secondary school programming. Teachers and students alike have voiced concerns that the cuts to education will mean fewer class options and less one-on-one time between students and teachers.

“I attended because I want to make it clear to the government that I disagree with the proposed changes to education. I feel that students who struggle in school will not get the support they need and will be more likely to be unsuccessful,” said local-area parent and Student Success teacher, Chris Kononiuk, who attended the Queen’s Park protest. “I feel that the rally was a success. There were thousands of people present, and from a variety of unions. However, the true measure of success will be if the changes do not proceed as planned.”

Cayuga Secondary School (CSS) students rallying together to protest the changes to provincial policy that affects the education system and more. A walk-out protest occurred Thursday, April 4, 2019 at CSS from 1:15pm to the end of the school day.
—Haldimand Press photo by Jerrett Heckbert. 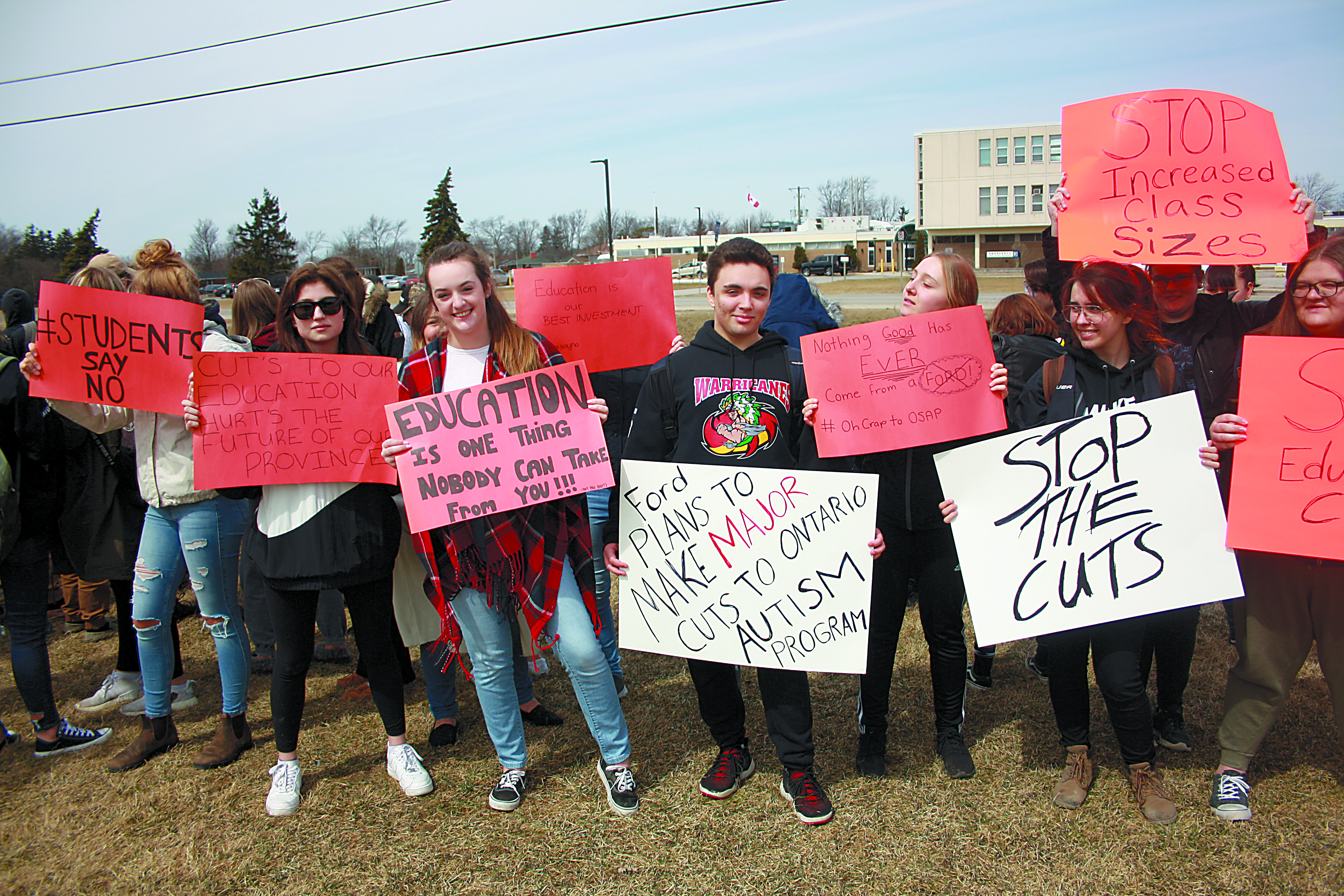 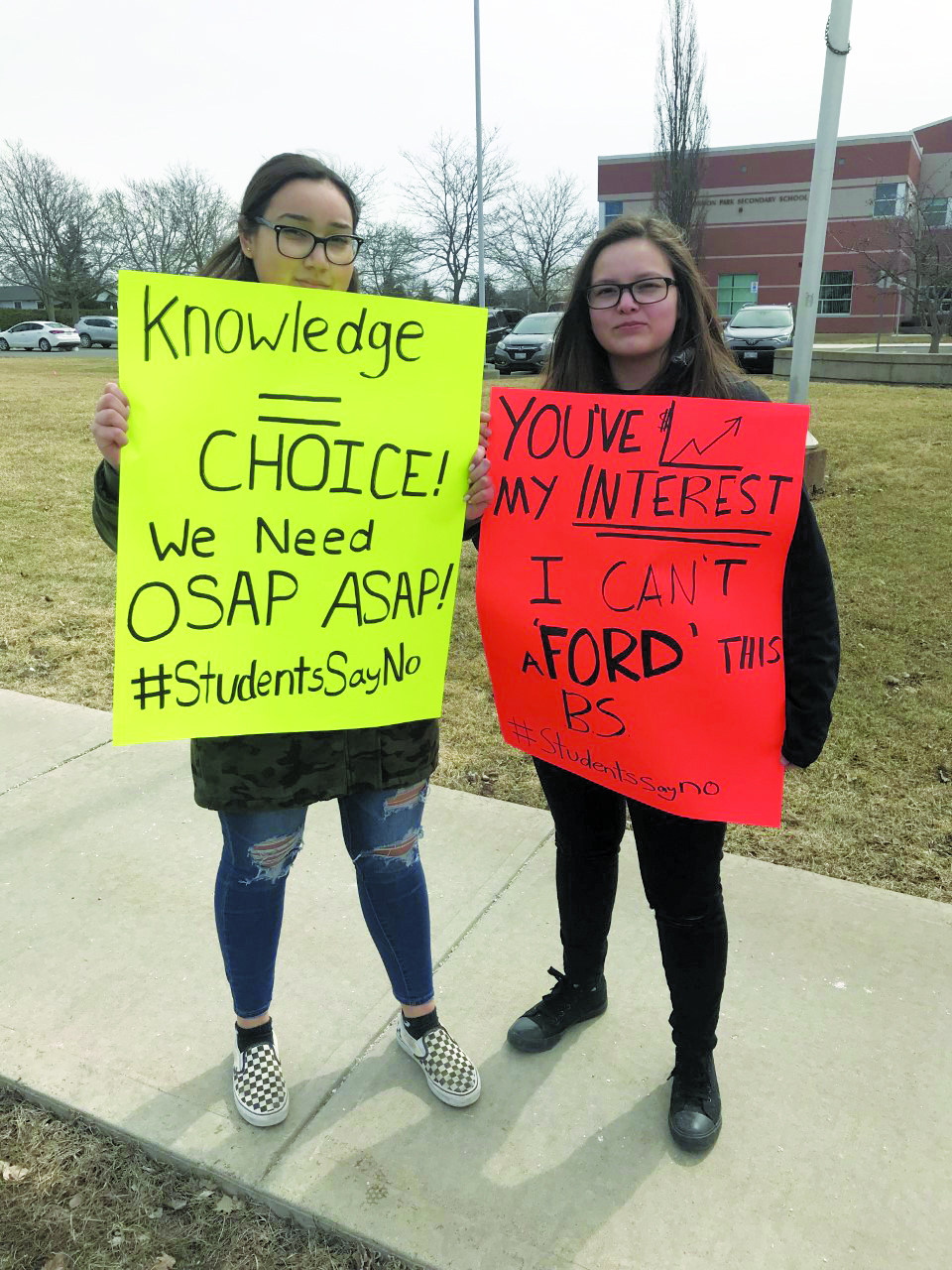 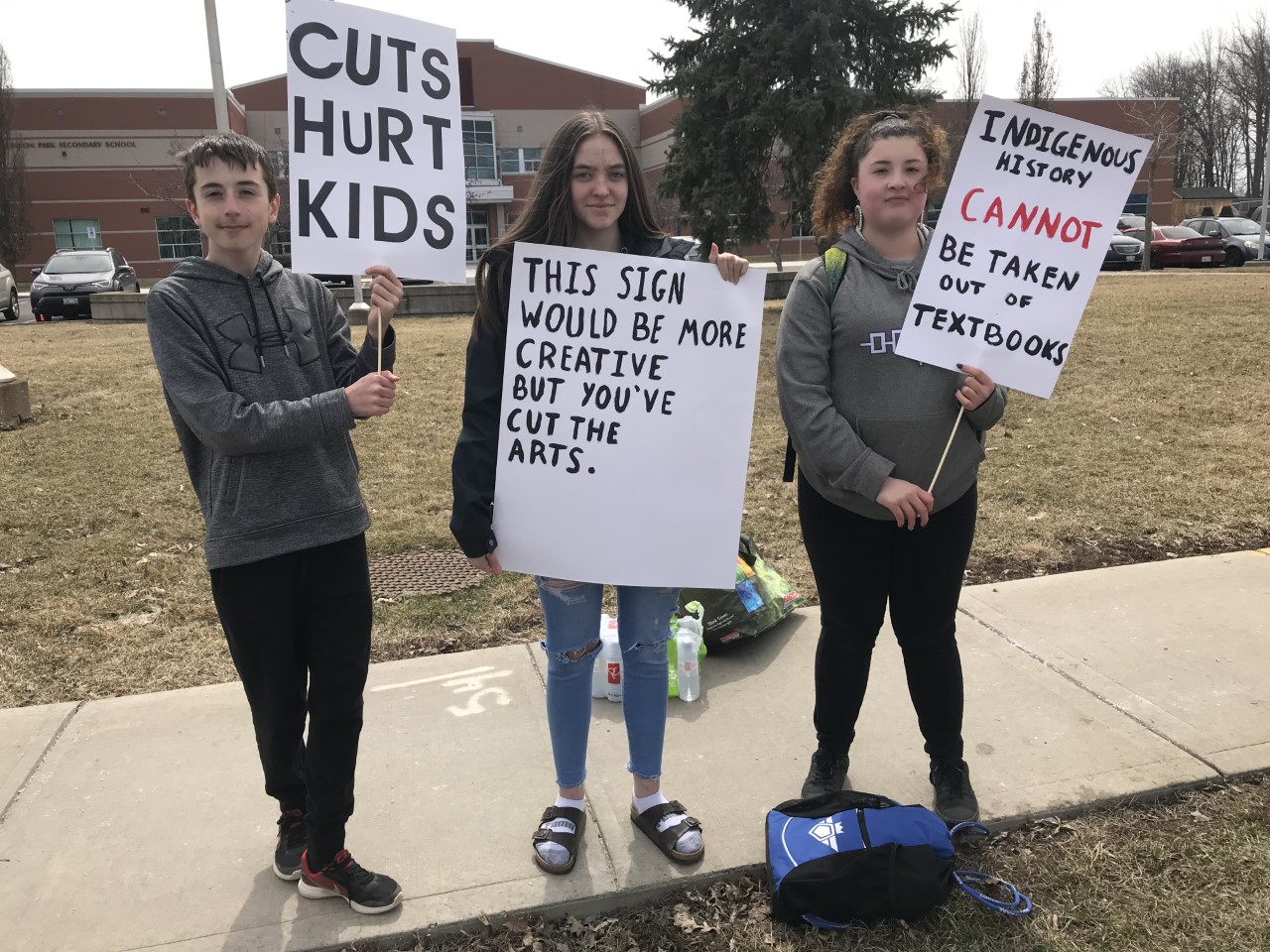 McKinnon Park student Christel Farkas said at the student walkout, “What they’re trying to do just isn’t fair. They’re trying to take away programs that are important to some of us, and it will be even harder for kids who need help with larger class sizes.”

Fellow MPSS student Cara Hill added, “This really affects all the students. I have younger brothers and I don’t want them in a classroom where they can’t learn efficiently. My brother needs extra help and I don’t think he will get the extra help he needs if the class sizes are that large.”

Meghan Piironen, who organized the walkout at Cayuga Secondary, said, “Now that classroom size is increasing, teachers will have a harder time dealing with their students and the students will not receive one-on-one time … making our education less worthwhile. Us students are the future, so that is why we fight to protect our education.”

Piironen added that standardized testing, such as the EQAO testing for math in Grade 3, 6, and 9, along with the literacy test in Grade 10, could be better options for funding cuts in order to balance the provincial budget.

“I think the education cuts are really unnecessary and so many teachers and students are going to be hurt and affected by this cut and it doesn’t need to be happening, said Ayrin Joseph, Grade 12 student at Hagersville Secondary.

When asked why she decided to organize a protest at Dunnville Secondary, Julianna Davidson, said, “I remember seeing it (the changes) on the internet and it had me thinking that someone needs to do something.”

Her classmate, Ania Rakowski, said, “I believe this protest is just. If we don’t do something, nobody will. This is our future; we need to stand for something.”

When asked if GEDSB supports the student protest, they responded with the following statement: “While the Grand Erie District School Board understands everyone has a right to their own opinion, we firmly believe students belong in the classroom where important learning is taking place, and where we can keep students safe. There are many ways individuals can voice their opinions and we urge students to choose ways that do not impact their learning.”

The Press reached out to the Ministry of Education for a comment on April 8 and were directed to a statement by Education Minister Lisa Thompson from April 4, before the teacher protest, that said, “Our government will not be         distracted from making the necessary reforms Ontario needs to improve math scores as part of a sustainable, world-class education system that protects what matters most for students.”

Thompson said April 4 was a “disappointing day … when we reached out to begin good-faith consultations with Ontario’s teachers, we instead (were) seeing Ontario teachers’ unions condoning a student walkout.”

She encouraged the unions to work with the Province on “real challenges facing Ontario’s education system”, such as the math crisis, instead of “political stunts”.

Thompson encouraged parents who were concerned for their children’s safety during the walkout to contact the Ontario College of Teachers to report any misconduct, and added, “I also want to advise all school boards that I expect them to take action to discipline anyone who abandons their classroom responsibilities … And I want everyone in Ontario to know that we are prepared to take action to give parents peace of mind that no one will use our children as a captive audience or bargaining chip as part of their union’s political games.”

Davidson was not pleased with Thompson’s suggestion that teachers used the students for a union stunt: “That’s far from the truth. The students of Ontario are intelligent and informed and can make decisions for themselves … It was not a disappointing day for Ontario as Thompson stated; it was a proud moment because young people across Ontario were passionate about something and stood up for something they believed in.”

Davidson added that they collected over 100 signatures during the protest at Dunnville Secondary, which they would be sending to Toby Barrett along with written letters and video interviews by the students.

The Ministry did not respond to a request for an updated statement. 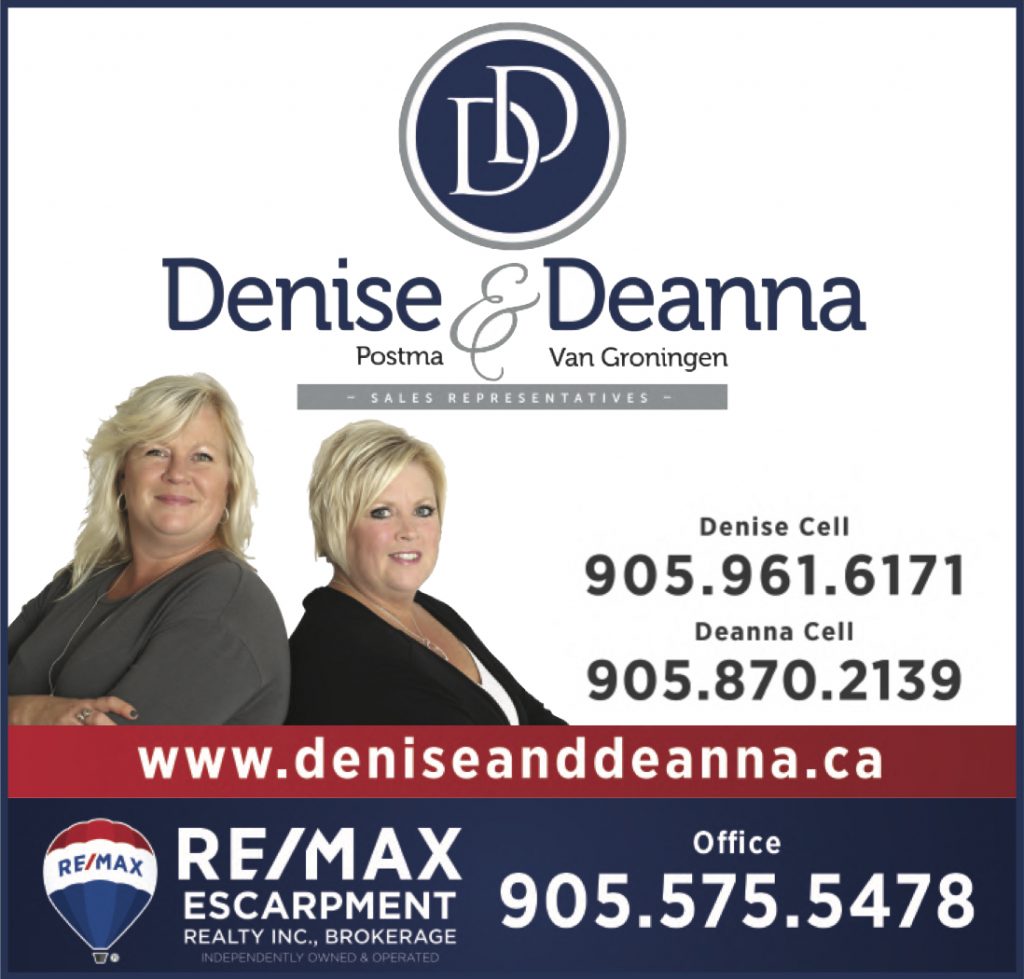 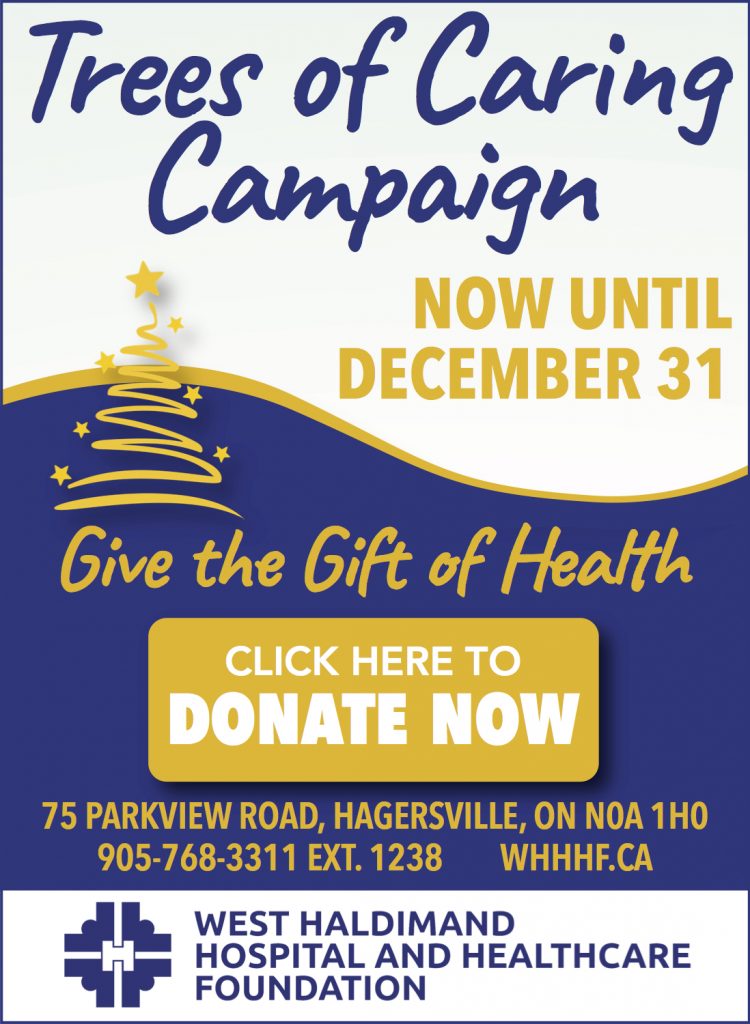